Having primarily focused on print- based media through their partnership with the Times, Raconteur realised that in order to get more engagement and users on their own website, they needed to invest in digital capabilities. The biggest challenge they faced was not having a reliable, robust system in place for data collection. That meant they didn’t know who was visiting their site, or why, and that became a real hindrance to content curation.

Raconteur wanted to make sure they were putting out content their readers found informative and useful and wanted to ensure non-returning users continued to come back, but they didn’t have the right solutions in place to achieve this goal.

Since the digital part of their business was in the early stages, they were missing out on the opportunity to collect valuable first-party data, insights, and potential subscription revenue for the future.

In order to grow, it was absolutely essential to grasp a firm understanding of user behaviour, in order to enhance the user experience. Without this level of understanding, Raconteur wasn’t able to deliver personalised content to boost engagement. In today’s digital world, publishers who don’t utilise reader data in this way will rapidly fall behind, as online readers become more and more accustomed to personalisation. That’s why Raconteur were looking for a solution that allowed the team to identify unknown users, analyse findings, and make informed business decisions quickly.

“We chose Zephr because of ease of implementation. Zephr’s ‘lighter touch’ and the confidence we had to be able to implement it without significantly changing much of the existing tech stack was key.”

With a small data team, Raconteur wanted to identify anonymous users, without the complexity of writing extensive new code. They needed to employ a flexible solution that was easy to use and implement, clearly demonstrated user flow diagrams, and enabled their non-technical team to curate subscriber journeys without spending hours or days on it.

That solution was to use customisable, first-party data capture forms that could easily be applied to their site. Using Zephr, Raconteur were able to A/B test the best registration form options and modify, curate, update and integrate them quickly and effectively to produce the highest conversions.

Moreover, by using Zephr’s identity module, Raconteur were able to incorporate visual design flow diagrams into their first-party data strategy, making it easy for their teams to implement, test and share new concepts without having to do any in-depth coding. This meant that non- technical campaign managers could achieve enterprise capability with a consumer-grade interface.

Since Raconteur implemented Zephr, they’ve been able to understand their users in a meaningful way and connect the enriched data to their CRM. Allowing them to easily utilise insights and information from readers such as email address, company, seniority, industry, and job function.

The implementation of a dynamic data collection strategy provided Raconteur with endless advantages, such as the realisation of 100 user identities each day. Allowing them to maintain a consistent bounce rate of 40-60% for targeted traffic, and site sessions that are 3min+ on average.

This, as well as the data trail created by each user, puts them in a great position for future growth, enabling them to connect with their audience even more than previously possible.

In summary, the implementation of first- party data strategies has enabled Raconteur to expand the digital side of their business without having to rely on third-party data or battle against rising advertising costs. The new framework Raconteur has built enables them to quickly test and utilise a key aspect of their business in the future (their own subscriber data) to expand with the times. Choosing Zephr also allows Raconteur to integrate easily with other tech as their business needs grow and expand.

“Moving forward, Zephr’s ability to ‘play with’ other platforms is core to our strategy too.” - Fayez Shriwardhankar, Head Of Data 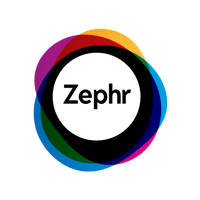